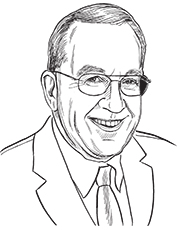 A co-founder of the Illinois PGA Foundation, Leon McNair has been interested as much in the charitable side of the game as the playing side. He was head professional at Fox Bend, a course he helped build working for architect-builder Brent Wadsworth, from its opening in 1967 until his retirement in 2005. He’s a member of the board overseeing the First Tee of Aurora and Fox River Valley, and president of Wadsworth Golf Charities. He was Illinois PGA Section president in 1991-92. As a player, he was part of a Southern Illinois squad that won the 1964 NCAA College Division championship. Former member of the selection committee.