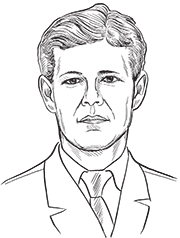 Raised in Highland Park, H. Chandler Egan is the owner of one of the greatest amateur careers in American golf, Egan won the U.S. Amateur twice (1904-05), the Western Amateur four times (1902-04-05-07), as well as the Intercollegiate individual title in 1902. Runner-up in 1903 Western Amateur, 1904 Olympic Games at Glen Echo, 1909 U.S. Amateur. Jumped into course design after moving to Oregon, including a remodeling of Pebble Beach, improving 16 of the 18 holes in conjunction with Robert Hunter, in 1928, two years after he won the California Amateur on the course. Egan designed 18 courses, including Eugene Country Club. Five-time winner of the Pacific Northwest Amateur.