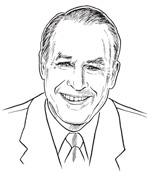 To say golf has been in the blood of Frank H. Jemsek would be an understatement. Son of the late Chicago area golf patriarch and charter Illinois Golf Hall of Fame member Joe Jemsek, Mr. Jemsek continues to follow in his father’s footsteps with his tireless efforts to provide the public golfer with first class amenities and a memorable golf experience.

Jemsek courses employs over 26 PGA and LPGA teaching professionals and each course has an award winning learning center and practice area. Innovations that Mr. Jemsek has implemented include the “No Embarrassment Golf School,” a series of six golf clinics from April through August, day and evening, each with five PGA instructed lessons for adults. The series is slanted particularly toward the beginner.

Mr. Jemsek gave the Western Golf Association the use of Cog Hill rent free since 1991 for the Western Open Championship, adding $150,000 per year directly into the Evans Scholars Foundation.

In 2004, the Illinois PGA presented Mr. Jemsek with an honorary membership for his generosity and support above and beyond the normal type.