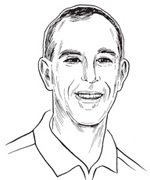 To some, Charles Henry "Chip" Beck is best known for shooting a 59 in a PGA Tour event – a feat he accomplished in the third round of the 1991 Las Vegas Invitational. It was only the second time a 59 had ever been recorded in PGA Tour history. Mr. Beck would go on to enjoy four victories on the PGA Tour – two of which came in 1988 at the Los Angeles Open and USF&G Classic. He was runner-up in the 1986 and 1989 U.S. Open Championships and at the 1993 Masters. Mr. Beck also competed on three U.S. Ryder Cup teams and most recently, became a member on the Champions Tour. In 2003, Mr. Beck added his name to the record books once again. During the second round of the Nationwide Tour’s Omaha Classic, he shot the first hole in one on a par-4.

Upon leaving the PGA Tour to sell insurance, Mr. Beck has donated his time and financial support to numerous golf organizations in Illinois. He currently serves as a director of the Western Golf Association and has been a generous donor to the WGA’s Chick Evans Scholarship Fund.