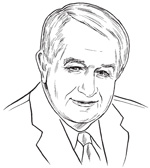 After more than 43 years of work as a golf course superintendent, Carl G. Hopphan continues to give back to the game that he loves so much. Even in retirement, Mr. Hopphan can still be seen at an office at the Midwest Golf House soliciting donations for the Sunshine Through Golf Foundation. On other days he can be seen mowing the lawn and the greens on the three-hole Sunshine Course.

Mr. Hopphan’s career began in 1953 when he took a job in his home town at Aurora (Ill.) Country Club. Three years later, he would become the private club’s superintendent. After 31 years at Aurora, Mr. Hopphan took over as the superintendent at another Chicago area private club – Evanston Golf Club in Skokie, Ill.

Mr. Hopphan would remain at Evanston for 12 years before retiring and entering the next chapter of his life when the Illinois Turfgrass Foundation asked him to become their director for development and oversee the building and development of the Short Course at Midwest Golf House, a research facility with playing capacity. His dedication to fundraising to support the Short Course and the Illinois Turfgrass Foundation has led to donations of over $100,000 on an annual basis. His tireless efforts will benefit research and all aspects of golf.